As linked up on Daring Fireball, the point-and-shoot market is in decline. This makes sense, people are either taking pictures using their cellphones or a dSLR. The former for convenience and the later for quality. The middle ground that the point-and-shoot camera used to serve just doesn’t make sense any more now that cellphone cameras have gotten good enough. As the market for point-and-shoot cameras dries up I think that the camera manufactures could pounce on an opportunity to continue to profit from the low-end market. While evaluating the olloclip for use on my iPhone, I started to wonder why Canon, Nikon or Sony don’t make a clip-on accessory for the iPhone. This could clip onto the iPhone via the dock connector and then be paired with a custom camera app that handled all the image processing. By virtue of being a larger external accessory the quality of the lens and sensor could be dramatically improved. The physical footprint of the device wouldn’t need to be very large since it wouldn’t need a dedicated display or physical storage.

I did a rough photoshop mockup of what this might look like, based on the iPhone 4S and Sony TX10. For comparison that camera has a 16.2-megapixel sensor and a 4X optical zoom, yet fits into a device only 17.9mm thick (the iPhone is 9.3mm). 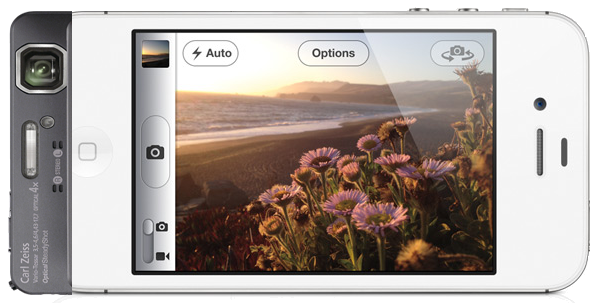 I would probably pay a couple of hundred dollars for such a device.