The question of when to drop support for older operating systems is always a bit tricky. An app creator wants to balance the dual goals of customer and developer happiness. Support for older devices can serve as an anchor to development holding back adoption of new features or capabilities.

I’m starting work on a major upgrade to My Recipe Book, my iPad app for organizing and managing your recipe collection. As part of my planning process I set out to determine what OS version I could safely limit myself to. My Recipe Book reports some basic analytics so I pulled them into Excel and run the numbers. 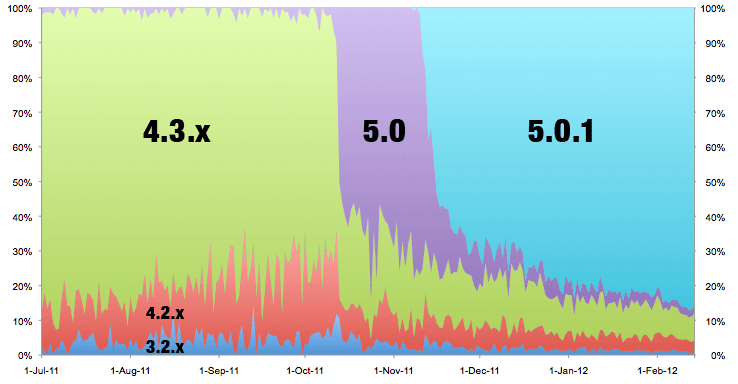 As you can see around 88% of the users of My Recipe Book are running at least iOS 5 and 99% of users are running at least 4.2. I’ll be dropping support for 3.2 in as part of this update. This will allow me to restructure and improve the quality of much of my code, especially by the incorporation of blocks. I expect to drop support for iOS 4.x soon, probably early this summer as more of the remaining 12% upgrade.

Perhaps the most striking thing about that chart is how quickly 5.0.1 was adopted. The over-the-air update process introduced in iOS 5 seems to really push user adoption. Almost all users (98%) who could use over-the-air updates have done so in the 3 months since the update was released. This bodes extremely well for developers in the future when iOS 6 may be adopted at a similar rate.