I got a lot of positive feedback to my recent article about iOS version statistics. I thought I’d go a step farther and expand the results to include Audiobooks, in addition to My Recipe Book. Audiobooks provides data for both iPhone and iPad. Furthermore, the free version of Audiobooks has around 100k weekly downloads so provides a much wider sample set. The data below represents the last week of usage. 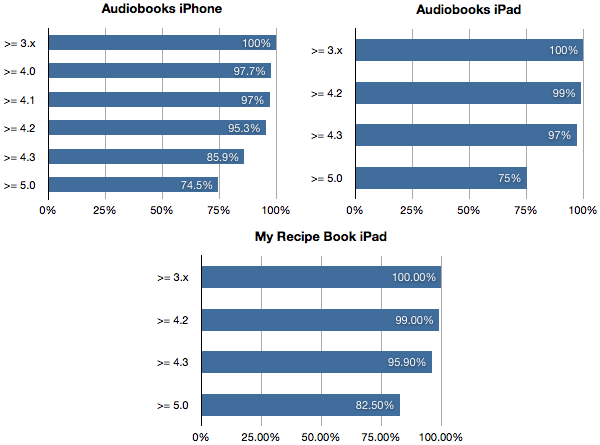 Based on this data it looks safe to drop support for 3.x. This would impact no more than 2% of users on the iPhone and 1% on the iPad.

Dropping support for 4.x is more controversial. Based on my data it looks like this would impact at between 17-25% of iPad users and 25% of iPhone users.

My data has a much larger proportion on 4.x than the data recently shared by Marco Arment, who is seeing greater than 90% on 5.0+ in Instapaper. While we could speculate about reasons for the difference in our two data sets, the bottom line is that it looks like a meaningful proportion of my users are still on 4.x.

The current #1 paid app in the App Store, Clear, only runs on iOS 5 so clearly supporting 4.x isn’t necessary for success in the store.

Looking at Apple’s own apps doesn’t provide clarity either.

Apple typically supports only the most recent iOS version when releasing a new app, then gradually bumps the requirements for existing apps. It looks like Apple’s most widely installed apps (iBooks and Apple Store) are still on 4.2. My gut says that 4.2 a good minimum for right now, with 4.3 as an aggressive alternative. That provides coverage for the vast majority of users and allows the developer to take advantage of most of the new affordances recently introduced.

For new apps 5.0 seems like a large enough audience to be safe. I hope to jump to iOS 5 for existing apps this summer but will only do that when I see the proportion of neglected users fall below ~5%. Developers should collect their own data for their apps and plan accordingly.