The need for speed.

As I begin doing the actual work of building out my apps’ WatchKit extensions, a topic that keeps coming to my mind is that of immediacy.

While every application I build always includes a consideration of speed. How fast each view can load, how fast I can render table cells, how quickly I can load and persist data. These considerations are typically rooted in a desire to make the experience of using the application pleasurable. I’m making things fast so that while you use my app it is responsive.

In a WatchKit application all those same considerations apply, but layered on top of them is a further requirement for immediacy.

My suspicion is that Watch Apps will spend much of their lives being used well below that threshold. Raising my wrist to glance at something then immediately putting it down again. These interactions are fleeting and brief.

Apple mentions this concept in their Human Interface Guidelines.

This means that I need to be extremely careful about how I’m building things so that I can get the user in-and-out of the app as quickly as possible.

This concept is probably best explained via an example.

For my Feed Wrangler app extension I’m expecting to present the user with a list of articles from their unread feed. Something that looks vaguely like this mockup. 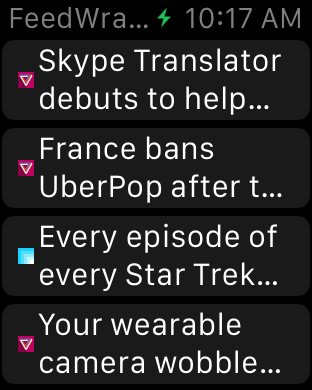 This will be a scrollable list within the main watch app and likely constructed into a digest format for the app’s Glance view.

There are a couple of different ways that I can structure the data provider for this view.

Without having actual hardware to test, the difference between the later two approaches is difficult to evaluate. I don’t know how important that extra 0.05 seconds will be in actual use. However, my guess is that the difference between good and great watch apps is going to be the sum of a lot of tiny optimizations like that.

Anything that could show the user a progress spinner (however briefly) is a failure on my part.