One of the more peculiar things I discovered during the sales process for my tesla was that it doesn’t have a spare tire. This seems like a general trend across car manufactures, either shrinking their spares to sometimes comical sizes or eliminating them altogether. The weight and space savings are obvious but it did make me wonder what happens when you get a flat.

When I was investigating this before I got my car I couldn’t find a straightforward description of the process from an owners perspective, and instead pieced it together from forum posts and the like. I recently experienced my first flat and so can now speak from my own experience. This post is my attempt to help anyone else who is curious about how the process goes and what to expect.

While driving along we started to receive low tire pressure warnings on the main dashboard. Initially these were just the regular “Low Pressure” warning that I’ve gotten a few times when I just need to top up a tire. So we added a bit of air to the tire in question and kept driving.

A few miles later the warning returned and now quickly escalated from ‘hey, one of your tires might need some air’ to ‘woah there, you need to pull over right now‘. 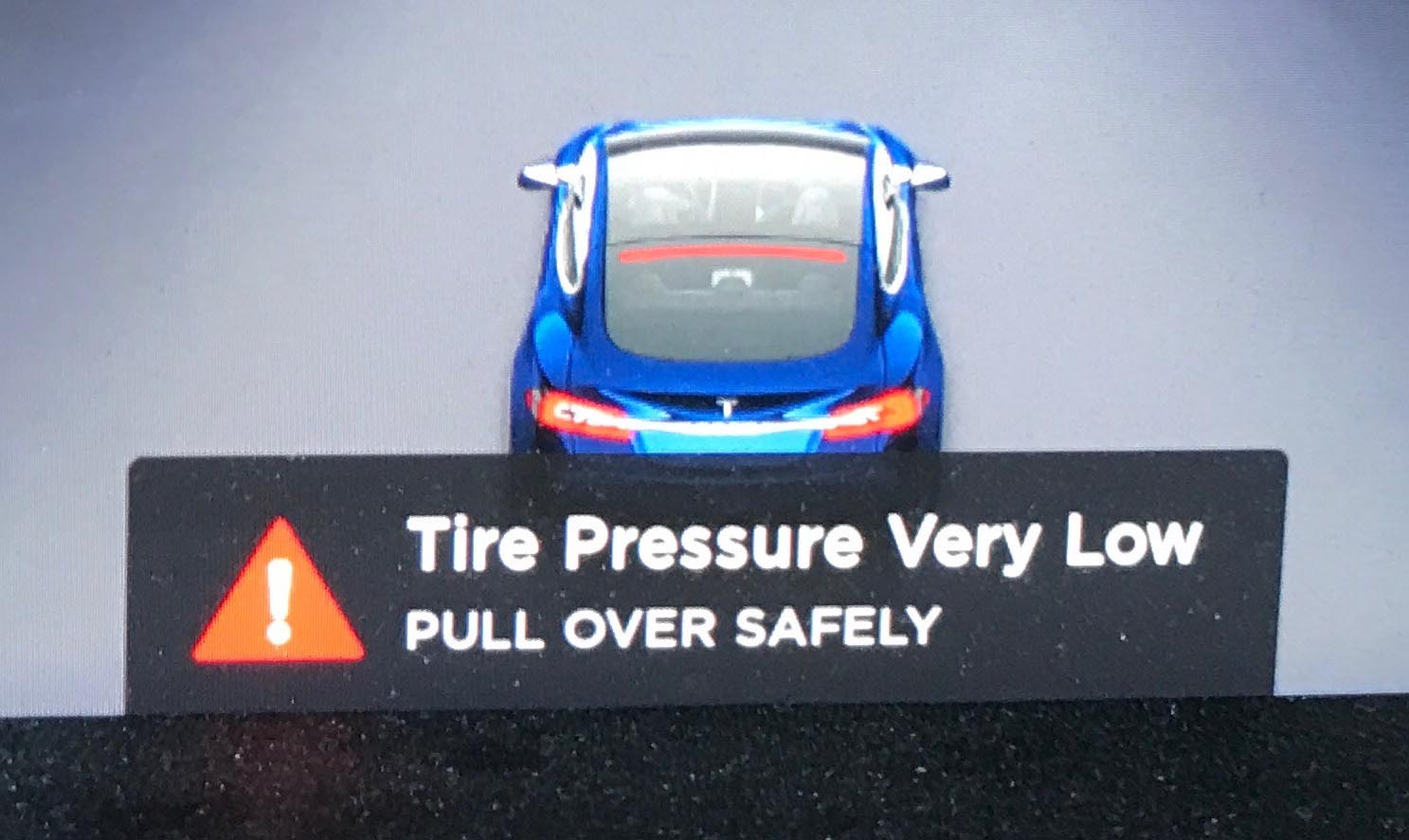 As soon as we safely could, we pulled the car over (in our case in a residential neighborhood). After a quick visual inspection the tire was definitely a full on flat now.

As the car has no spare the next thing to do was to call Roadside Service. They answered right away and were able to lookup my account profile information from Caller ID, so we very quickly moved right to sending over help. The representative had a good balance of friendliness and directness.

He said the nearest tow service with a tire for me was about 30-60 minutes away and would be able to provide me with a loaner spare to get me moving again and the tow truck driver would then take my flat tire to my nearest Tesla service center for evaluation. He also then quite helpfully said that I should expect a call from him in around an hour to check that things were moving along.

The tow truck driver called and asked to confirm the tire size and specs for my vehicle. He also let me know that he couldn’t guarantee that the rim for the loaner spare would exactly match my other wheels (in my case it did but I appreciated the warning). 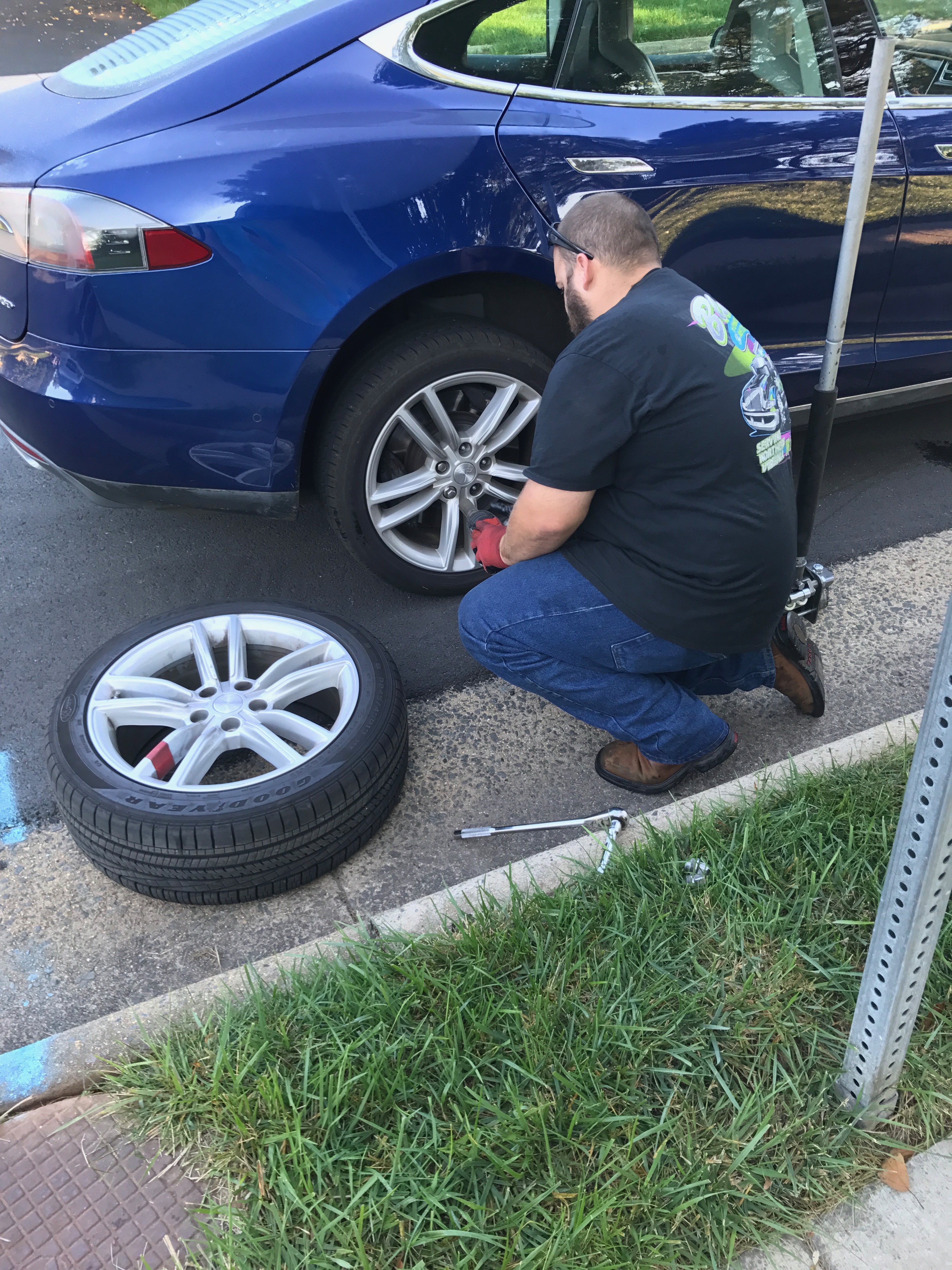 He arrived around 40 minutes later and proceeded to remove my flat tire and put on the loaner spare. He then took the broken tire with him and said he would drop it off with Tesla later that day, and then I should expect a call from Tesla with next steps for getting it fixed or replaced. From talking to him it sounded like Tesla had provided his tow truck company with a few spare tires that they cycle through as needed. He was efficient and helpful. The whole process took around 10 minutes.

Before he took away the old tire I was able to locate the source of my trouble…I’m no mechanic but I’m pretty sure this isn’t good: 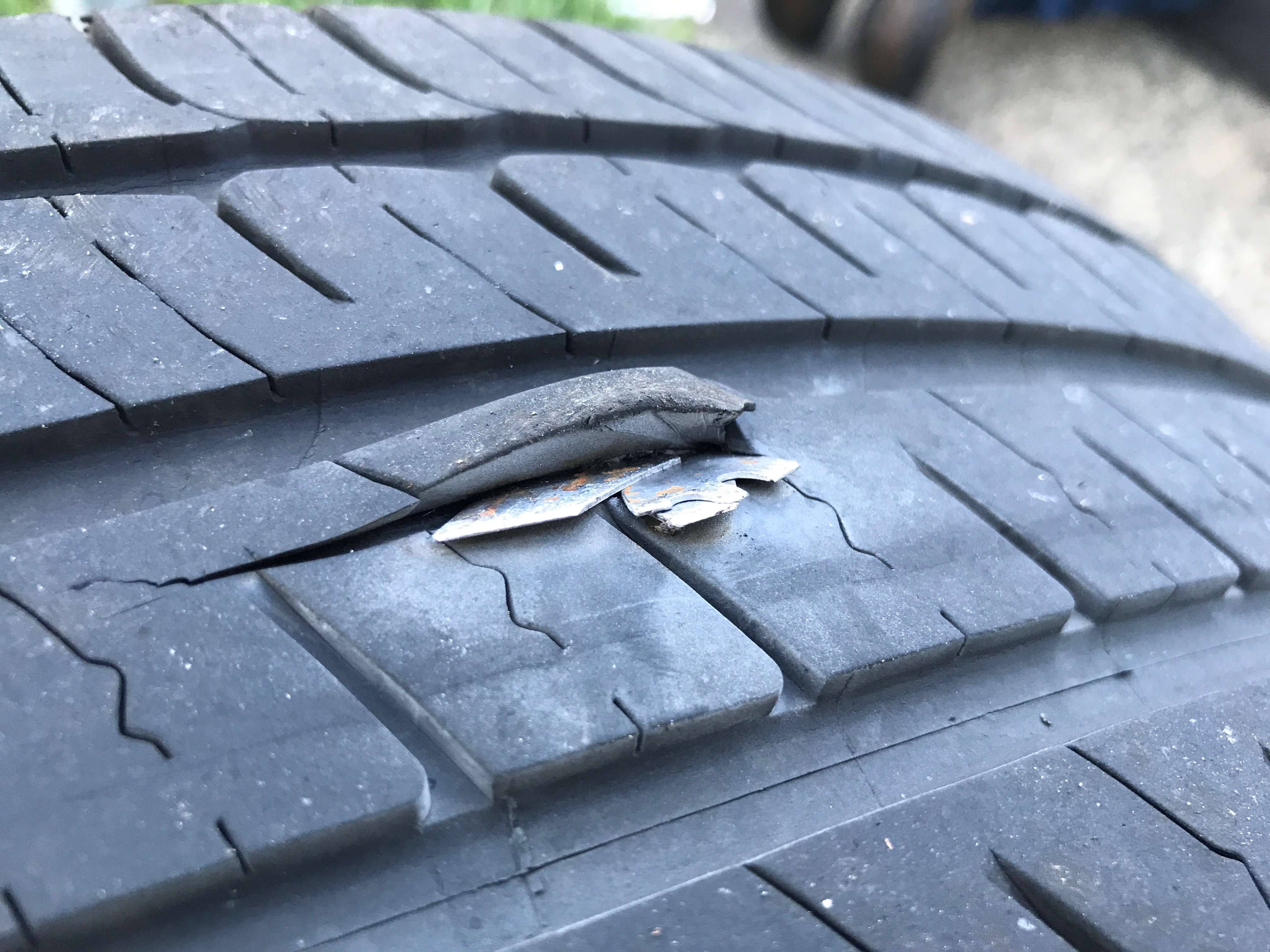 The same customer service representative from Roadside Service called me back to make sure everything had worked out correctly. He also sent over a simple document for me to e-sign regarding the loaner spare. Basically a general waiver of liability and an agreement that I’d bring back the tire to Tesla within 3 business days (or later if mutually agreed to).

So basically rather than carrying a spare in my truck, when I needed one it was delivered to me on the side of the road and I could then use it until a proper replacement could be arranged. The tire I got was a full size regular tire, and didn’t have any use restrictions. There was no cost for either the roadside service or loaner spare (though I think that after my car is beyond a certain age their might be).

The only downside of the loaner spare was that the tire pressure system wasn’t connected to it so I had this warning every time I drove until it was replaced. 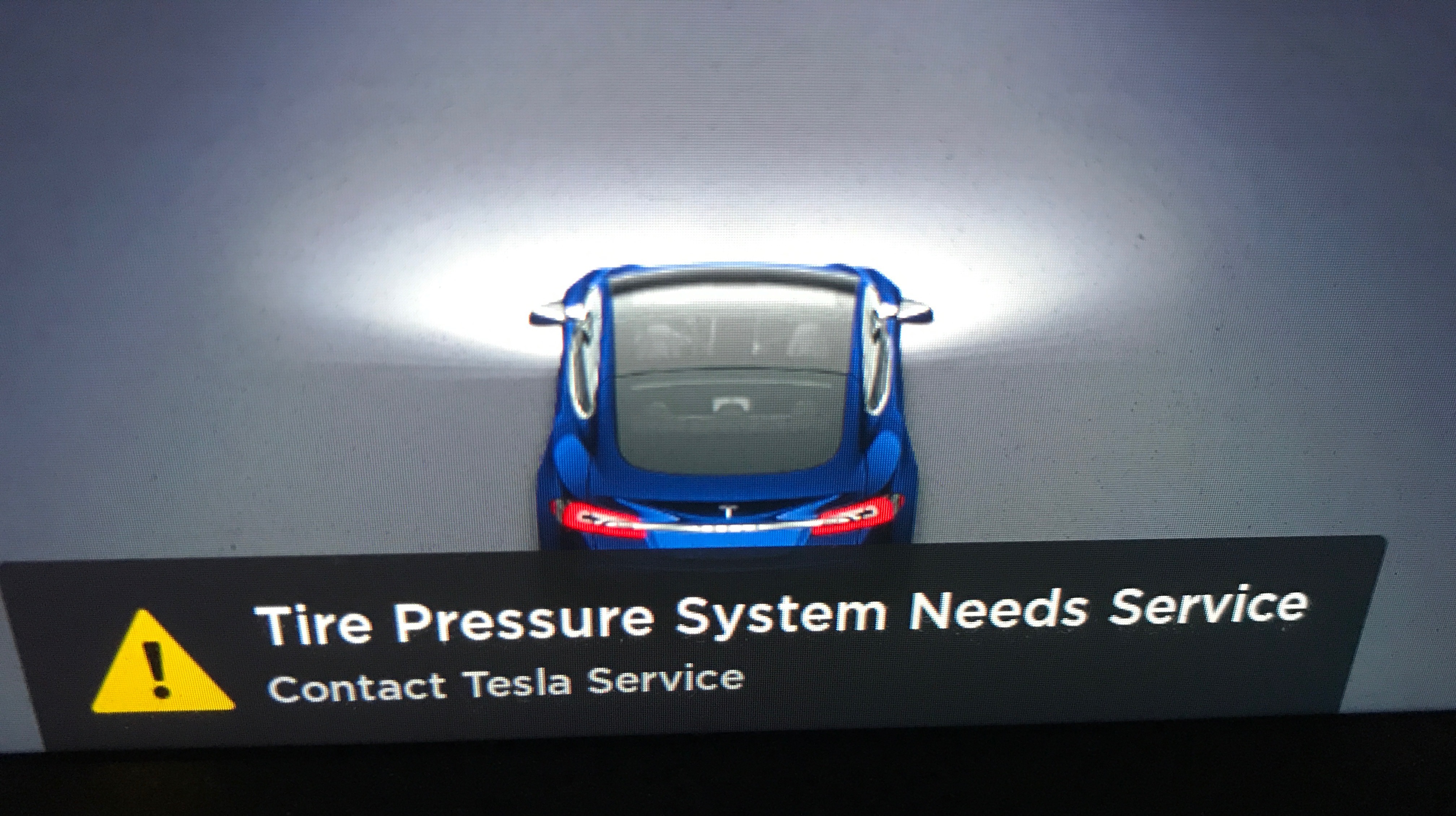 I got a text message from Tesla service later that day after the tow truck driver delivered the tire to them. 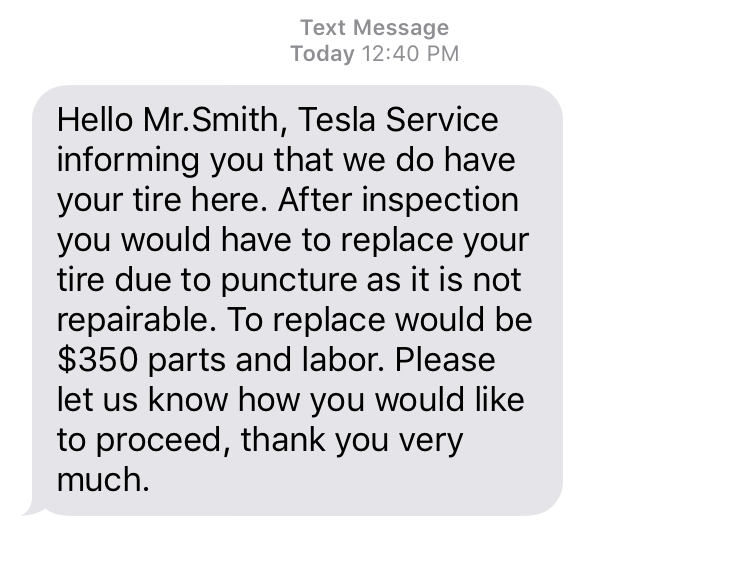 First, let me say how much I loved that this was a text and not a phone call. While a bit silly I really loved that I could handle the entire process of scheduling the replacement over text message. That way I could just pick up the conversation as I was free and didn’t feel like it intruded into my day very much.

As I’d guessed when I saw that big chunk of metal sticking out of my tire I was told that I needed a new tire and that the cost for the replacement would be $350. Which is a bit higher than I may have hoped for, but certainly not unreasonable. I was able to authorize the work to begin changing the tire on my rim and schedule a time for me to drop in to have it put on. This ended up being 5 days after I got the flat because that worked best for me.

I brought my car in and they replaced the tire, reset the tire pressure monitoring system and gave it a good wash. The appointment was quoted at around an hour, but ended up more like 2 hours.

This happened to me in probably one of the more ideal circumstances. We were driving on quiet roads and were able to pull over into a neighborhood. The nearest Telsa Service center is only 10 miles away and the tow truck was within an hour. I’d expect that if this had happened to me out on the highway, in the middle of nowhere things would have been a bit more tricky or at least taken much longer. But hopefully the general process would follow the same smooth progression.

Overall, I was very pleased with the process. The lack of spare had given me a bit of pause when we were first considering the car but this process went off without a hitch and was about as painless as I could hope for given the circumstances. In a funny way it is slightly liberating to not have a spare in the trunk, so no matter what happens I have to call for professional help. This mean I’m never having to put myself in a potentially awkward or dangerous situation roadside.