The response to my Apple Watch Ultra expedition video has been really encouraging. Video is very far from my area of expertise and something that I feel only a passing confidence with. However, I still think that I’ve learned a few things worth sharing in the creation of this video, in case anyone else wants to make a similar video using their iPhone.

This video was recorded entirely on an iPhone 14 Pro, using a combination of the Camera app and DoubleTake (discussed below). I edited it in Final Cut Pro. The raw source footage was around 21GB, which I AirDrop-ed over to my MacBook Pro.

By far the hardest part of making a video outside in the elements is getting usable audio. The built-in microphone is only really viable indoors or on very still days.

What I have found is that it is essential that the audio be recorded directly into the iPhone. While external recorders can be later synced up in Final Cut, this process is super cumbersome and means that you can’t easily check your footage in the field. It is also essential to have some kind of wind/weather screen on your microphone, otherwise you will constantly be ending up with unusable shots where all you hear is wind noise.

After this trip, I think I’ve finally settled on a workable solution that ended up working very well in practice. I have started to use the Rode Wireless Go 2 connected directly to my iPhone. This microphone system includes two parts, the microphone/transmitter and then a receiver unit. The microphone comes with a wind screen which can be installed on top. This device is clearly intended to be used with a larger, more traditional camera setup, but with a little creative cabling I got it working well with an iPhone.

What I found to work well instead was to get a cheap TRS-to-TRRS cable and then plug this into the iPhone headphone adapter. This makes the phone think that the audio is coming in from an external headset and worked a treat. iOS then used this audio source whenever it was plugged in without any additional setup or configuration. 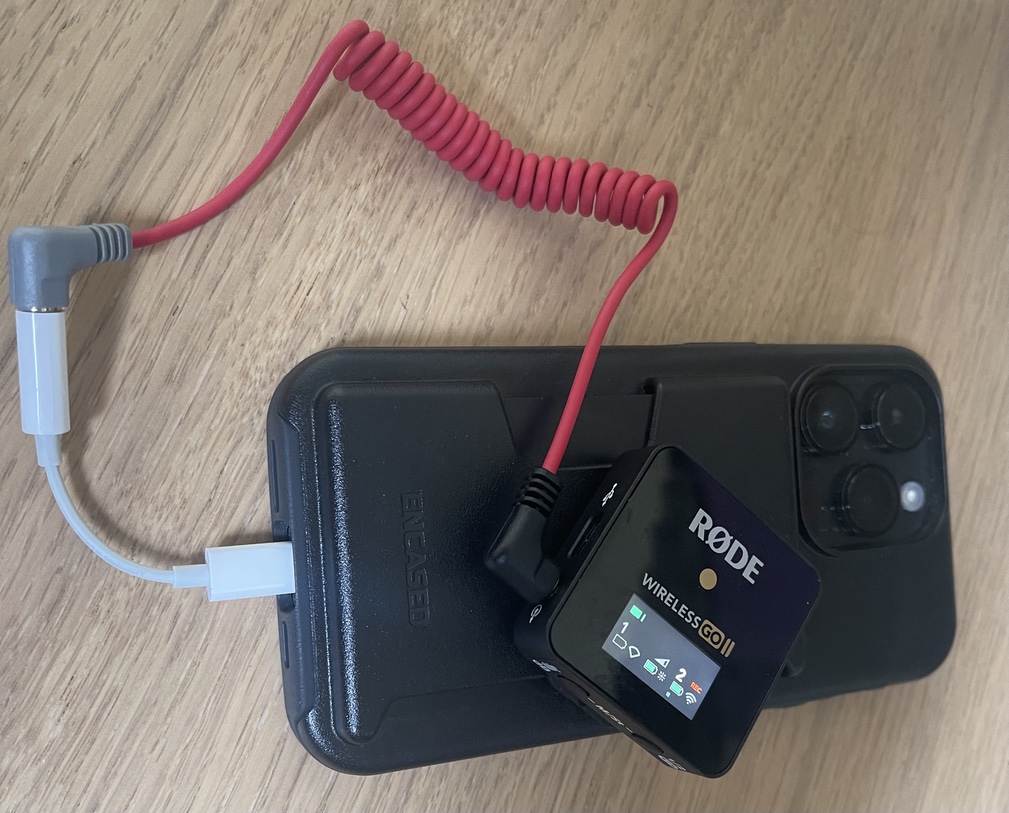 I primarily use my iPhone with my right hand. So I clipped the receiver to my right wrist using my Apple Watch’s strap as the clipping point (and tucked the end of the cable under the strap for safe storage while moving). For this trip I was wearing a watch on each wrist, but in the future I’d just wear my watch on my right wrist for this purpose. That way whenever I want to record some video, I’d just pull out my iPhone, plug in the cable and start.

Probably the best example of this setup’s quality is this section in the middle of my video where I’m discussing the audio quality of the Ultra. I was around 20 meters from my iPhone/receiver, across a road, with steading drizzle and a blustery wind. The resulting audio is very clear and usable.

For the majority of my video I used the main Apple Camera app. I find that you can’t beat the performance and ease-of-use of it. I shot the video in 4K/30fps.

I tried doing a few scenes in Cinematic mode but ultimately regretted it because the resulting video is much more cumbersome to use. I also did this video with HDR enabled, but ended up regretting that too. While I’m sure there are ways to make HDR work for a video destined for YouTube, I found in practice HDR made the workflow and upload process much more complicated. In the end I disabled HDR for my export because no matter what I tried I couldn’t get it to look right on YouTube. For a recreational video creator it just isn’t worth the marginal benefit.

The other app I used to record video was FiLMiC’s DoubleTake. This lets you record concurrently from the front and back cameras. I found this really helpful in doing my “Walk and Talk” segments. Previously, I’ve done these with just the selfie camera, but this leads to a kinda boring visual. Also, it makes it hard for me to ‘show’ things, which in the case of this video was useful to be able to cut between my face and video of my wrist.

Since both resulting clips use the same plugged-in microphone, later syncing up the two videos was very straightforward in Final Cut.

The only thing I wish both of these apps included was the ability to overlay an audio peak meter while recording. FiLMiC’s main video app can do this, but neither DoubleTake or Camera.app does. I’d have liked the confidence that I hadn’t misconnected something. Instead, I did lots of quick test shots which I played back to confirm my audio/video was solid.

In a couple of spots I included scenic timelapses in my video. What I have found to work really well for these is to not use the timelapse mode in Camera.app, and instead just record a very long regular video. The challenge with the timelapse mode is that it limits your later control over timing and quality. If you just speed up a long, fixed position video in Final Cut you end up with the same effect but can adjust the timing easily later on depending on what you want.

For these fixed shots I attached my iPhone to a lightweight, tripod using a Studio Neat Glif. This worked well and was very lightweight, which I value on my hikes.

If I wanted the most stable, clean video possible I would have taken along a handheld gimbal for this trip. But the reality is I really didn’t want to lug around the weight of something like that with me and have to stop to set it up any time I wanted to record a clip. So instead I just shot all my non-static shots handheld and relied on the iPhone’s stabilization to be good enough.

There were a few clips where I think the result is a bit more wobbly than I’d prefer, but overall this approach worked well. Something I’d recommend doing here is while recording your walking shots make sure you don’t lock your elbow. You want to keep a flexible arm while recording, this lends a bit of natural shock absorption to the video and actually is a pretty good ‘virtual gimbal’.

For a few of my ‘talk to the camera’ shots I setup my iPhone on a tripod and then moved away from it. For these I didn’t want to use the selfie camera so that I could get the full, high quality video of the back cameras. In order to check my framing and start/stop the video I then used the Apple Watch’s Camera Remote app. This gives a little preview of what the iPhone can see, so I could check I was in frame. Then I could remotely start and stop capture. I wasn’t sure if this would have any issues working out away from WiFi and civilization, but it worked great for me well out in the wilderness. You can catch a glimpse of this in action right at the end of my video.

Overall, I have to say the creation of this video was much simpler than I would have guessed. The recording process (once I’d sorted out the audio situation) was natural and not that dissimilar to what I’d be doing anyway while capturing photos and video clips for myself.

I’m sure there are better ways to edit and compose the video in Final Cut. I could have added music or transitions or all manner of other touches. But the reality is that I find that if I over complicate something like this I just won’t do it. I’d rather keep it simple and have it exist, rather than strive for sophistication and leave it a dream. Each time I make something like this I’ll learn and improve.

I highly recommend giving something like this a try (and you can start off just using your AirPods) on your next adventure. It is both a good skill to nurture as well as something that will preserve a valued memory later on. Photographs and video clips are lovely, but recording you actual thoughts and experiences is so much more rich and valuable.